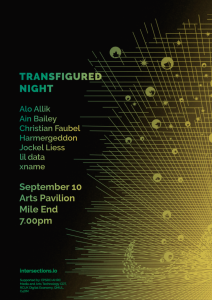 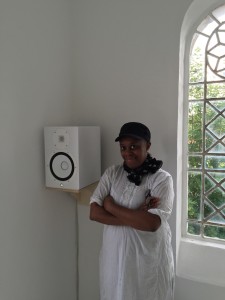 Ain Bailey is a sound artist and dj. Her compositions encompass diverse mediums, such as field recordings and found sounds, which are inspired by ideas and reflections on silence and absence, architectural urban spaces, and feminist activism. Her electroacoustic compositions are created for a variety of forms, including multichannel and mixed media installations, moving image soundtracks, live performance and dance. 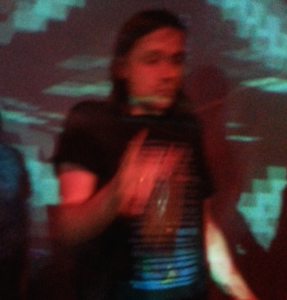 Alo Allik is a sound artist who has performed his audiovisual works, electroacoustic compositions, eclectic DJ sets and live electronic music throughout the world at a number of festivals, including Transmediale, Piksel, ISEA, TodaysArt, ShinyToys, Pluto, NIME, and many others. His aesthetically and geographically restless lifestyle has enabled him to traverse a diverse range of musical worlds including DJ-ing electronic dance music, live electronic jam sessions, electroacoustic composition, free improvisation and audiovisual performances. He has collaborated with a number of musicians and artists, including Shelly Knotts, Andrea Young, xname, Satoshi Shiraishi, Yota Morimoto, Keiko Uenishi, Michael Day, Simon Jermyn, Shane Latimer, and Justin Carroll among others. In recent years he has been actively participating in the Algorave movement developing a style he describes as noisefunk which combines traditional rhythm patterns with evolutionary synthesis algorithms. Currently, Alo works as a researcher at the Centre for Digital Music, Queen Mary University of London, while continuing to perform his music and visuals to audiences worldwide. 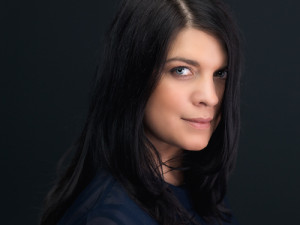 Andrea Young is a Canadian musician specializing in experimental voice and live-electronics. She performs an acoustic, amplified, processed and resynthesized voice, as well as a re-purposed sound-controlling voice enabled through feature extraction and data-driven live electronics. While her work relies on digital innovation, her musical output relies on the integration of her digital interface with analogue and re-purposed electronic media. She has performed her work internationally at REDCAT and Automata, Los Angeles, La Sala Rossa for Innovations en Concert, Montreal, Casino Baumgarten and Espace Senghor for Kyma International Sound Symposiums in Vienna and Brussels, The Emily Harvey Foundation, New York, as well as during ICMC in Athens. Her research has been published in The Leonardo Music Journal and her performance of Agostino di Scipio’s Audible Ecosystemics No.3b was published by La Camera Verde. 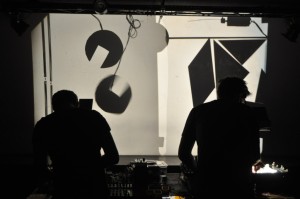 Christian Faubel is an interdisciplinary researcher and artist. He is currently working at the laboratory for experimental computer science within the Academy of Media Arts Cologne. He holds a PhD in electrical engineering and has worked as a researcher on autonomous systems and neurpscience at the Institute for Neural Computation from 2002–2012. In 2002 he founded derstrudel, a collective for the mediation of a relaxed approach to electronics robotics. Since 2002 he has taught more than 50 workshops in building simple analog robots at international venues and festivals. Together with the artists Tina Tonagel and Ralf Schreiber he is also part of the overhead projector band Ray Vibration. They use overhead projectors, self build-instruments and analog robots for creating audiovisual performances.
In his work he is interested in what enables autonomous behavior and how complex autonomous behavior may result from the interaction of very simple units and from the dynamics of interaction between such units. In his artworks and performances he tries to convey insights about theoretical concepts from psychology, neuroscience and robotics such as emergence or embodiment along an aesthetic dimension. He considers his artworks, workshops and performances to be in the tradition of philosophical toys as they combine the mediation of scientific concepts with pleasure and amusement. 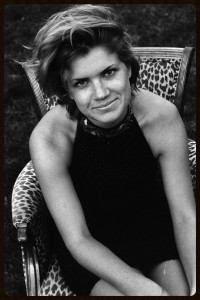 Sara Sinclair Gomez, as a mezzo-soprano who has thrived in typically beautiful musical settings, performs repertoire ranging from opera to chamber works, from the traditional to the avant-garde, with the majority of her work focusing on the performance of newly written and emerging music. She has performed 20th and 21st classics such as Circles by Luciano Berio and From the Grammar of Dreams by Kaija Saariaho. As a creative artist, her interests include challenging beauty and developing the innate friction, disturbance, and ugliness within. 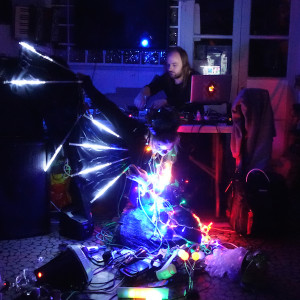 Harmergeddon == Nathan + Fae Harmer || audio/visual performance art duo living and working in London. They have been collaborating since 2007 on a variety of mixed media art works and officially formed Harmergeddon in 2010. From the unwanted, unheard and unseen they create instruments, performances, sound pieces, installations and videos. Their work resounds around atmospheric and meditative soundscapes, forming kinetic pulses, drifting textures and undulating drones. This is often set to highly manipulated visuals and performance. Their live improvisations focus on the serendipitous working with live electronics, obsolete consumer electronic devices and the drifting periphery. 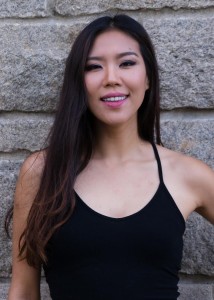 Sharon Chohi Kim is a voice artist, educator, composer and avid collaborator based in Los Angeles. She is a dedicated explorer of the sonic possibilities of the human voice and the countless ways of applying them within such contexts as opera, contemporary, experimental, electronic, and musical theatre. She was recently seen as Lucha in Hopscotch with the highly acclaimed opera company The Industry, and as a vocalist in the West Coast Premiere of Sila: Breath of the World by John Luther Adams for the Ojai Music Festival. Sharon has performed at The Dorothy Chandler Pavilion, REDCAT, Walt Disney Hall, MOCA, Zipper Hall, Human Resources, the wulf, Glow Festival, Barndall Gallery Theater and The Machine Project, and has performed with such organizations as The Industry Opera Company, Dublab, Los Angeles Opera Company, ILK; Los Angeles; Spectrum, New York; El Paso Opera Company and Chamizal National Memorial, Texas; and Jang Chun Art Hall and Yeoungdeungpogu Theatre in Seoul, South Korea. She received an MFA at California Institute of the Arts. Sharon is currently a member of the voice faculty at American Musical and Dramatic Academy in Hollywood, California. 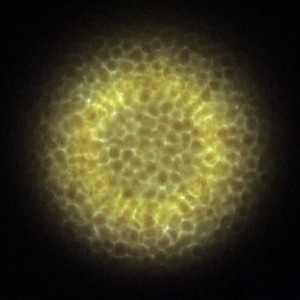 Jockel Liess creates generative audio-visual compositions, which in its form and structure derive from artistic traditions of visual and musical minimalism. In his mainly abstract work, he explores ideas of micro tonality, structural composition, synesthesia and interconnected sound/image relations. 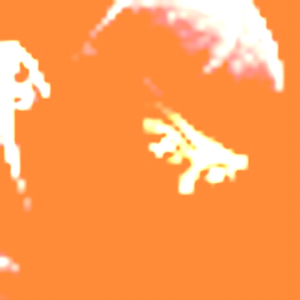 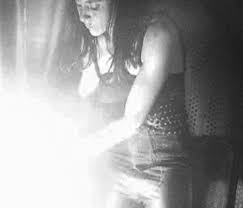 xname
London based conceptual electronic artist from Milan (IT), she makes performances and interactive installations. Her live compositions transform light and other electromagnetic frequencies in sound waves through self built synthesizers and complex semi chaotic machines.
http://xname.cc 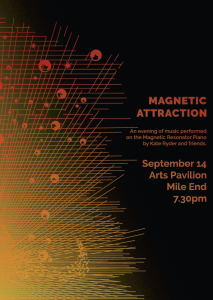 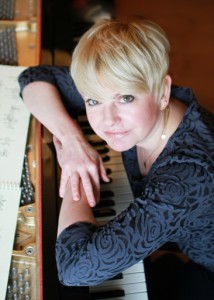 Kate Ryder’s wide ranging experience as a pianist encompasses solo work and collaborations with leading performers and ensembles in dance, electronics and theatre where she has established herself as a versatile and original performer. She has had many works created especially for her by composers in the UK and abroad. She has a particular interest in working with extended techniques and unusual keyboard instruments – toy pianos, antique keyboards and prepared piano -incorporating them into her work through commissioning, performing, recording and giving workshops on these unique instruments. She has co-founded several ensembles with instrumentalists and sonic artists where her performances have been described in the press as “virtuosic” and “magical”.
She is currently Creativeworks Entrepreneur in Residence at Kingston University, developing projects using new technologies and extended techniques, and has previously held several prestigious residencies including Visiting Artist at UC Berkeley (with harpsichordist Jane Chapman), Brunel University, University of Bogotà, and Goldsmiths, University of London. She recently took her projects – and instruments – to festivals in Australia, Scandinavia and Russia and has curated events at London’s South Bank Centre for their Massed Piano weekend, and for the Cornelius Cardew Festival. 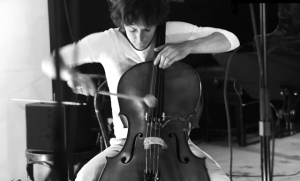 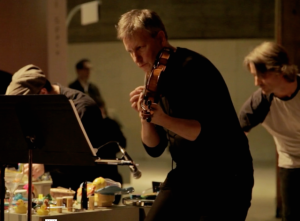 About the magnetic resonator piano: 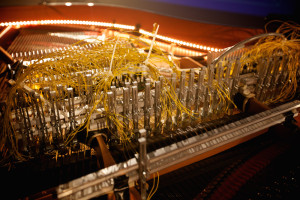 The magnetic resonator piano (MRP) is an electronically-augmented acoustic piano capable of eliciting new sounds acoustically from the piano strings, without speakers. Electromagnets induce vibrations in the strings independently of the hammers, creating infinite sustain, crescendos, harmonics, pitch bends and new timbres, all controlled from the piano keyboard. The MRP installs in any grand piano and has been used in compositions, performances and recordings internationally. Videos can be found below and on this page. The MRP was created by Andrew McPherson, Senior Lecturer in Digital Media at QMUL, electrical engineer and composer by training. 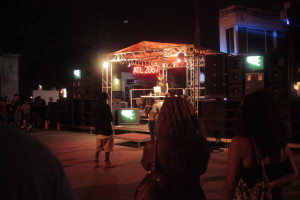 Ben White is an artist and researcher who works at the intersection of art, music and information networks. He works in collaboration with Eileen Simpson on the ongoing Open Music Archive, a collaborative project to source, digitise and distribute out-of-copyright archive recordings and a vehicle for collaborative projects exploring the material’s potential for future reuse.
Recent projects include include: Auditory Learning for British Art Show 8 (2015-2016), Premonition 2037 (2016) for KALEIDOSCOPE at Modern Art Oxford, Local Recall at Hallé St Peter’s Manchester (2014), ATL 2067 for Flux Night Atlanta (2013), Open House: Divided Estates at Casa Luis Barragán / de_sitio Mexico City (2012), Parallel Anthology at the 17th Biennale of Sydney (2010), Free-to-air at ICA London (2008) and Cornerhouse Manchester (2007). He is currently a MAT PhD student based in the School of Electronic Engineering and Computer Science at Queen Mary University of London.
www.openmusicarchive.org/projects
www.twitter.com/70revolutions